Posted on September 12, 2016 by jilldefeliceart.com

Young boy leaving flowers outside the US embassy in Moscow, 9/11/2001. Courtesy September11news.com

Here at the Jersey shore it is a hot, muggy, end-of-summer sort of day. Nothing exciting, nothing unusual happened here today.

Fifteen years ago, another September 11th started off in a routine, normal way. It ended very differently.

I wasn’t at the shore in those days. I was living in Moscow, Russia, and like many other people around the world, I will never forget the events of that day.

It was late afternoon there. My oldest boy was on a school trip to Finland. My youngest son and I just come home from the Anglo-American School, where I taught first grade. My phone rang as I walked in the door. It was my husband.

“Turn on the TV. I can’t get on the Internet here. Something has happened. Put on CNN.”

I dropped my bags and raced downstairs to the television. As I waited for the set to come on, I could hear the chaos at my husband’s office in the city. He kept asking, over and over, “Do you have it? What do you see? What are they saying? What. Do. You. See?”

The image on the screen cleared. I saw the first of the twin towers, huge plumes of gray smoke billowing into the blue skies. I stared in disbelief, trying to make sense of the trailer running along the bottom of the screen.

“One of the twin towers is on fire.”

I took a minute to focus on the broadcast and the horrible truth of what was happening sunk in. I watched, in disbelief as the second tower was struck. I don’t remember the rest of our conversation or hanging up the phone.

Over the next few days, the images and stories coming out of New York were etched into my brain – terrified men and women plummeting from the towers to their deaths, the fires, the towers collapsing to the ground, clouds of dust filling the streets of Manhattan. Later, it was the heart-wrenching stories of last phone calls, the story of the brave passengers of flight 93, heroic sacrifices, miraculous reunions.

Amid so much grief, so much fear, there were also beautiful moments. When I worked in Manhattan in the early 80s, I would never have imagined its citizens, all of them, banding together and working selflessly to provide aid and comfort to all in need. In the days that followed the terror, my heart nearly burst with pride for that wonderful city.

I would like to add that America did not stand alone, either. Leaders and citizens around the world stood by us in prayers and deeds in the aftermath of 9-11. I was forever touched by the outpouring of everyday Russian citizens when a sea of fresh flowers appeared overnight along the red brick walls of the US Embassy in Moscow. They spanned a full city block and then some. Friends from all over the world took the time to check on us and send their condolences for the USA’s loss.

I did not know any of those who perished that day. My family, thankfully, was safe from harm. I will not pretend that I have any understanding of the depth of hurt and pain caused to those who lost loved ones, but like all Americans, I grieved for the victims and their families. I grieved for our nation. We had been naive. It couldn’t happen to us, but it had, and we would never really feel safe again.

There are many remembrances of 9-11 being written and published today, by far better writers than I am, but I wanted to reflect on my own memories of that day because as painful as it is to remember, it is important that we never forget. 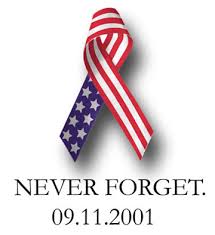 writer, traveler, artist
View all posts by jilldefeliceart.com →
This entry was posted in Uncategorized. Bookmark the permalink.